Nasser Al-Attiyah extended his lead in the 2019 Dakar Rally when he conquered Thursday’s marathon stage from Arequipa to Tacna in an impressive 3:38:49, just under two minutes ahead of Wednesday winner Stephane Peterhansel in his Mini. The 1-2 finish now means that Al-Attiyah and Peterhansel are 1-2 in the overall standings, separated by just 8:55 going into tomorrow’s return to Arequipa.

Al-Attiyah and Peterhansel appear to be the drivers to beat after the past two days of action have jumbled up the field. Third place Nani Roma is over 20 minutes back, while Sebastien Loeb is more than 50 minutes adrift in sixth in his privateer Peugeot. Seventh place Cyril Despres is the last driver within an hour of the lead, while Wednesday mechanical issues for defending winner Carlos Sainz, Tuesday overall leader Giniel de Villiers, and American Robby Gordon have each well out of overall contention.

It’s not all doom and gloom for the Americans, though, as Ricky Brabec bounced back from a disappointing Wednesday performance to best the bikes’ run to Moquegua with a time of 3:40:30. Thanks in part to a 14th place run by Chile’s Pablo Quintanilla, Brabec shot from seventh to first in the overall standings with today’s stage victory. He holds a 2:19 advantage over Quintanilla, and a 4:22 lead over Toby Price, who rebounded from his own Wednesday struggles to wind up third on the stage and third overall.

In the Side-by-Side category, Sergei Kariakin earned the fifth stage victory of his Dakar career by over 14 minutes. That enabled the Russian to extend a more than 11-minute lead over second place Gerard Farres, who finished third in the run to Tacna today. Rodrigo Moreno, today’s runner-up, is third overall, with defending Side-by-Side winner Reinaldo Varela fourth on both the Thursday and overall charts. American Casey Currie continues his first Dakar Rally in a perfectly respectable ninth place, aided by ninth on the stages today.

Trucks were the remaining class that headed to Tacna, but it was Andrey Karginov, not Eduard Nikolaev, who delivered Kamaz a stage victory today. Nonetheless, Nikolaev still leads his teammate in the overall standings by 4:58, and Dmitry Sotnikov completes a team lockout of the overall podium thus far. Quads, meanwhile, joined the bikes in the ride to Moquegua, and another stage win from Nicolas Cavigliasso means last year’s runner-up is now more than 35 minutes clear of any other competitor. 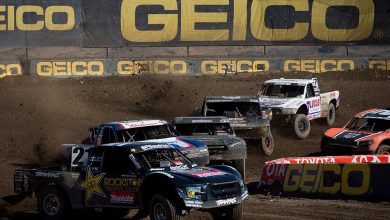