by Chris Leone // Website // Twitter
Images via Subaru Motorsports USA (1); Dreyer & Reinbold Racing (2)
Get 15% off all DirtFish Rally School classes by using the code JBDIRTFISH at checkout at www.DirtFish.com

At this point, Subaru Motorsports USA’s dominance of all things rally in North America is unchecked, whether it’s on the stages or closed circuits.

The famous blue and yellow WRX STIs returned to the top step of the podium on both days of the inaugural Americas Rallycross of Gateway, the series’ first-ever doubleheader at World Wide Technology Raceway at Gateway. But instead of defending series champion Scott Speed on top, as was the case at Mid-Ohio Sports Car Course last month, it was Chris Atkinson scoring his first-ever rallycross victory on Saturday, and Patrik Sandell making it three wins among three different Subaru drivers on Sunday.

Saturday’s finish saw Atkinson chase down, and make contact with, Steve Arpin in the final corner, sending the Loenbro Motorsports driver spinning across the finish line. Sunday’s final, meanwhile, saw Sandell take a much larger gap over teammate Speed to the checkered flag. Sandell, who finished third on Saturday, was the only Supercar driver to take two podium finishes, while Tanner Foust finally returned to the podium with a third place on Sunday after winning twice in ARX’s inaugural season. 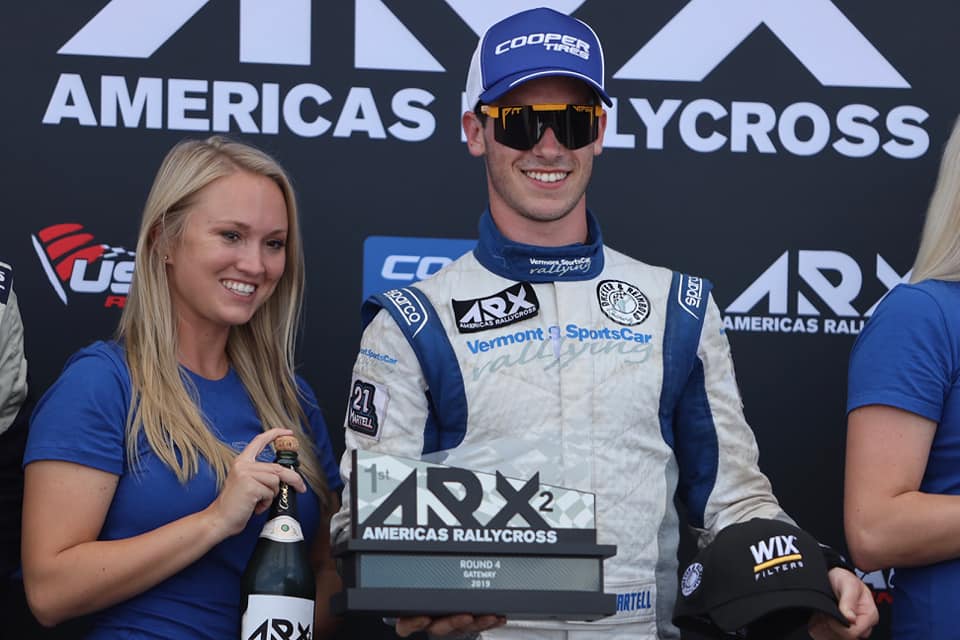 ARX2 was all about the return of Conner Martell, as last year’s champion returned to the grid with Dreyer & Reinbold Racing and swept the weekend. Cole Keatts and JR Hildebrand completed an all-DRR podium on Saturday, while Fraser McConnell and Brad DeBerti went 2-3 for Martell’s former team, DirtFish Motorsports, on Sunday. Meanwhile, ARX3 saw Blake “Bilko” Williams return to rallycross, as he swept both crosskart finals in a pair of battles with 2019 Pikes Peak International Hill Climb Rookie of the Year Tommy Boileau.

Speed carries a 12-point Supercar championship lead, 79-67, over Foust into the second half of the season, with Sandell and Atkinson tied for third at 66. McConnell’s Sunday podium boosted him into the ARX2 points lead, four ahead of Mid-Ohio winner Alex Keyes, while John McInnes and James Kirkham are separated by a single point for the ARX3 lead.

ARX returns to action at Grand Prix Trois-Rivieres on August 3-4, competing alongside FIA World Rallycross for the only time this season. Last year’s Supercar podium from Quebec featured Speed, Foust, and Ken Block, who won’t be competing this year; in ARX2, Martell took both rounds of the Canadian doubleheader over Christian Brooks, with 2019 Supercar rookie Travis PeCoy and Keyes the third place finishers on Saturday and Sunday, respectively.