“It’s crazy—having so many people ahead of you, starting P18, I thought there was no way I was going to be able to get through it,” Proudfoot said. “I just went one (truck) at a time. I finished P6 in my heat race, so I knew I had to stay in front of (Cam Pedersen and Josh Fox) to have a chance, and I was pressured the whole way. I’m dumbfounded… I can’t believe I got through it.”

After the success of April’s eShort Course World Cup, a four-race whirlwind tour of iRacing’s short course trucks and tracks, the eShort Course Triple Crown was announced as a way to give off-road fans more virtual racing. The new format saw three full-length heat races for crossover drivers, off-road racers, and sim racers, followed by a feature event that inverted the top eight finishers from each session on the grid, plus a select group of promoter’s options added to the rear of the field. To keep things interesting, each race also saw a manual competition caution after five laps to stack the field back up.

Travis PeCoy and Mickey Thomas cruised to victory in the professional driver races, while Fox scored a win in the sim racer category after holding off World Cup champion Pedersen until Pedersen’s connection failed with just two laps to go. Other drivers with strong performances in the preliminary rounds included NHRA champion Ron Capps, Pro Lite star Ronnie Anderson, and Bobby Rafferty, who inherited second place in the sim racer event from Pedersen. The results of those races narrowed a 40-truck field down to 26 for the main event.

Biffle took the pole for the feature event through the inversion and held on to a top-five spot for much of the race, while Vargas took the lead and commanded the field for most of the race. Starting from the back, the sim racers diced their way through the field, with Proudfoot, Fox, and Pedersen among the quickest from 18th, 23rd, and 25th on the grid, respectively. Vargas opened the door with a bobble on Lap 9 leading up to the corkscrew, giving Proudfoot room to make the pass, while PeCoy attempted to hold off Pedersen and Fox.

Pedersen saw his opportunity coming out of Turn 1, leapfrogging both PeCoy and Vargas briefly, but contact and a subsequent spin brought an end to his hopes of scoring another victory. In the chaos, Rafferty snuck past Fox to jump from sixth to third and earn the final podium spot. Connor Parise would sneak past Vargas as well to claim the final spot in the top five. 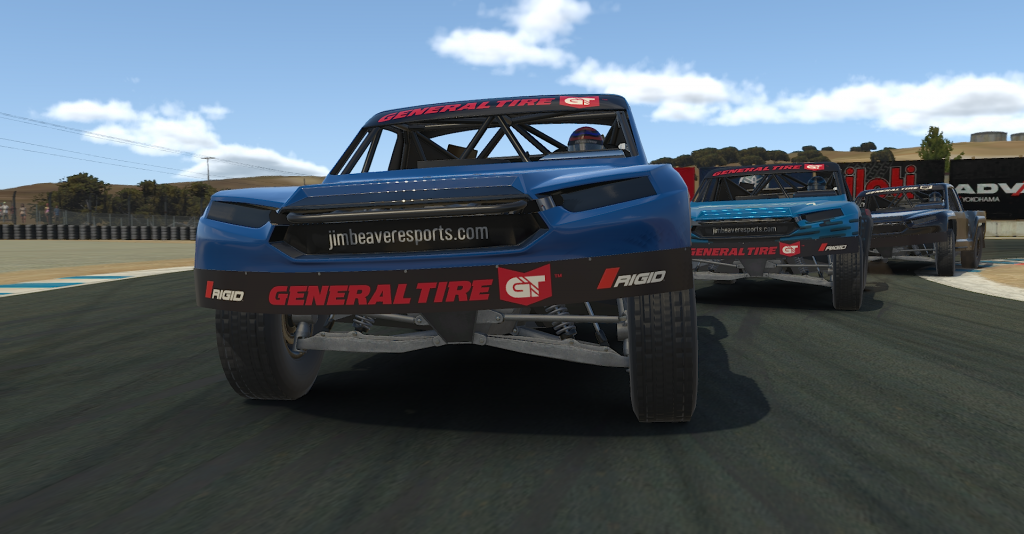 Full results from the Pro 2 main event of the Jim Beaver eSports eShort Course Triple Crown round at WeatherTech Raceway Laguna Seca were as follows:

The Jim Beaver eSports eShort Course Triple Crown concludes on Saturday, May 16 with a return to Wild Horse Pass Motorsports Park and a shift back to the Pro 4 trucks. The race will be streamed live once again at 3PM PT/6PM ET on Jim Beaver’s Facebook, Twitch, and YouTube pages, and crossposted on industry Facebook pages, with production by RaceSpot TV. For more information on Jim Beaver eSports and the eShort Course Triple Crown, visit www.downanddirtyshow.com.