PARKER, ARIZONA (September 24, 2019) –– Just two races remain on the 2019 eNASCAR PEAK Antifreeze iRacing Series calendar heading into tonight’s event from the Charlotte Motor Speedway Roval. Jim Beaver eSports drivers Michael Guariglia and Eric J. Smith will look to make the most of the popular track’s debut in the series, and build off of solid momentum built over the first two rounds of the series’ playoffs, taking their Down & Dirty Show Powered By Polaris RZR/GoPro Motorplex Ford Mustangs to the track tonight at 9PM ET.

The Charlotte Motor Speedway Roval made its debut on the Monster Energy NASCAR Cup Series schedule in 2018, producing an immensely popular race and one of the most anticipated playoff rounds on the 2019 schedule. The track has been updated on iRacing in advance of this year’s race, reflecting a significant change to the backstretch chicane that real-world drivers will face this weekend.

“The Charlotte Roval is one of my favorite events on the real-world NASCAR schedule, so I’m excited to see it making its eNASCAR debut in iRacing,” said team owner Jim Beaver. “Michael and Eric have been making really impressive strides over the past few races and showing the pace to run up front, and I’m excited to see if we can put both cars in the top 10 this week.”

Two weeks ago at the Indianapolis Motor Speedway, Guariglia returned his #15 Ford Mustang to the top 10 with a solid ninth place finish. The result marked the second consecutive top-10 finish for the team, as Smith earned 10th place in the playoff opener at Darlington Raceway. Guariglia also finished ninth in the series’ visit to Charlotte’s oval layout in May, while Smith was among the biggest position gainers in the first road course race of the season when he improved by 15 spots at Sonoma Raceway in June.

“The Roval is a beast unlike any other this season,” said Smith. “The constraints of the oval make the road performance of the setup not ideal in the infield section. The Roval is a challenge, but still a ton of fun.”

“The Roval presents a new track that no one has seen before in the PEAK Series,” added Guariglia. “There are numerous places where errors can occur and create a huge pileup, especially on the start of the race as we are all bunched up. To be pacey here, a huge part is the braking zones and your ability to hit the last two chicanes correctly. If you mess those up, you can easily lose a second. Keeping the rear tires on the car is going to be important throughout the run to maintain the long run pace. Overall, the track is still about survival for all of the drivers as calamity can strike at any moment.”

Tonight’s eNASCAR PEAK Antifreeze iRacing Series race from the Charlotte Motor Speedway Roval will stream live at 9PM ET on the iRacing eSports Network on Facebook, Twitch, and YouTube. The 2019 season will wrap up on October 10 at 5PM ET at Homestead-Miami Speedway, as the team returns to NBCSN and NASCAR America for its third televised event of the season. In addition, Jim Beaver eSports will announce its plans for participation in future iRacing World Championship series in the coming weeks. 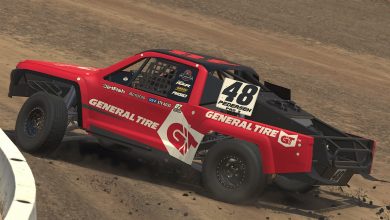