Houston’s NRG Stadium plays host to the third and final Triple Crown event of the year for Monster Energy Supercross, as the home of the NFL’s Houston Texans returns to the schedule for the second year in a row. Coming off a dramatic weekend in Seattle that ended with a controversial points penalty, the 13th of 17 rounds in the 2019 season is sure to provide us with more of the same.

As the top 450 riders in the world and the always-strong 250 West class prepare to drop the gate for a Texas-sized showdown, here are the storylines we’ll be watching out for: 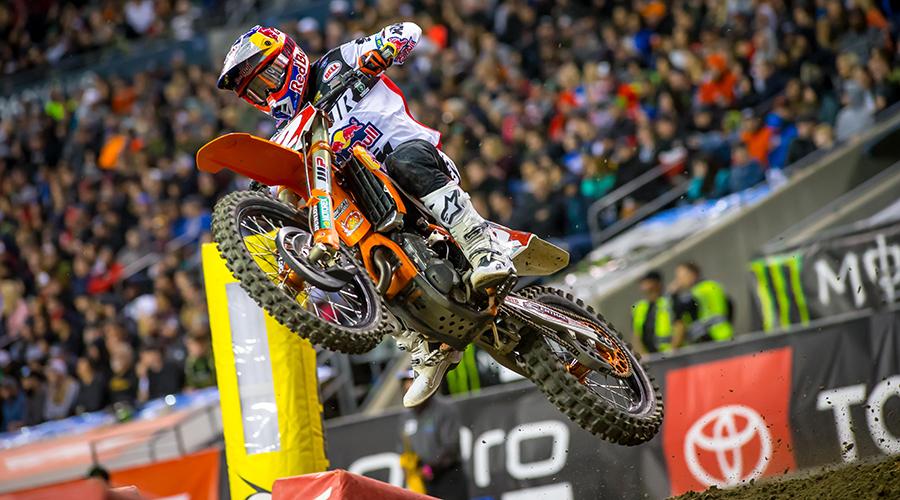 Here’s the good news for Red Bull KTM’s Marvin Musquin: he’s won the past two 450 main events in a row, giving him sole possession of second in points behind teammate Cooper Webb. Here’s the bad: after jumping on a red cross flag last weekend in Seattle, he earned a seven-point penalty (two positions plus two points) that negated any advantage he gained in the standings, and so he remains 14 points behind Webb, now with one fewer race to close the gap.

Despite KTM’s dominance atop the podium this year, the battle for the top spot remains a four-way fight, with Kawasaki’s Eli Tomac and Honda’s Ken Roczen still well within striking distance of Musquin, and less than a race’s worth of points behind Webb. The gap from Webb to Roczen remains just 23 points, and with the Triple Crown format set to test riders’ endurance through the night, bad luck early could shift the point standings dramatically.

It certainly happened in Seattle, when a devastating crash injured both Chad Reed and Justin Brayton, mainstays of the top 10 in the standings all season long. Reed suffered eight broken ribs, a collapsed lung, and broken scapula, and will sit out the rest of the season; Brayton tore his MCL and sprained his ACL, and hopes to return for the final two rounds of the year. Ben LaMay will serve as Brayton’s fill-in, joining Josh Grant (for Aaron Plessinger), Mike Alessi (for Vince Friese), and Dean Wilson (for 2018 champion Jason Anderson) among the riders who have earned injury-related promotions this season.

Blake Baggett continues to round out the top five with a 20-point advantage over Wilson for the spot. Joey Savatgy’s inconsistent yet promising season sees him seventh in the standings as the top rookie. Behind the injured Reed, Justin Barcia and Cole Seely, both of whom have missed time themselves this season, complete the top 10. 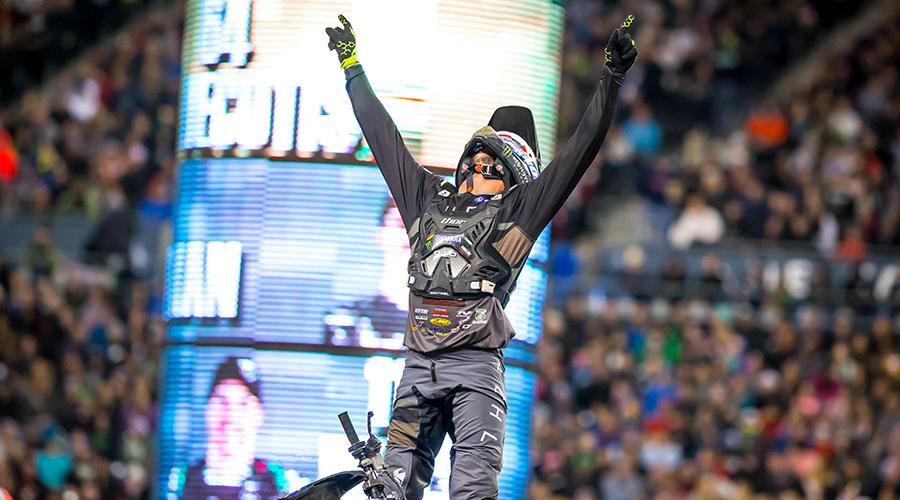 Two of the top five riders in 250 West points had weekends to forget in Seattle, as Colt Nichols crashed and bruised his leg after taking the lead from Jimmy Decotis in the main event and Shane McElrath had to withdraw from competition due to nerve pain. That enables Adam Cianciarulo and Dylan Ferrandis to focus on one another in the championship battle from here on out, and if Seattle was any indication, we’re in for a hell of a show.

Four times a bridesmaid in 2019, Ferrandis set up a French rider sweep of the weekend in Washington after holding off Cianciarulo in an intense battle in the main event. The victory, Ferrandis’ first in Monster Energy Supercross, enabled the Star Racing Yamaha rider to pull within eight points in the standings of his Pro Circuit Kawasaki adversary.

With McElrath likely missing more time, the intense five-way battle for fifth in points becomes even more meaningful. RJ Hampshire, Michael Mosiman, Chris Blose, Cameron McAdoo, and Decotis are all within just nine points of one another heading into Houston. Assuming that Nichols doesn’t miss time and maintains third, two of the aforementioned riders are now in prime position to score a top five in 250 West points.