As if two of the world’s most powerful racecars lined up side-by-side isn’t enough, The Strip at Las Vegas Motor Speedway doubles the fun for the NHRA Mello Yello Drag Racing Series every year with the Four-Wide Nationals. The first of two events under the four-wide format each season, Las Vegas will be the second of just eight rounds in the regular season to host all four of the sport’s premier classes: Top Fuel, Funny Car, Pro Stock, and Pro Stock Motorcycle.

Four-wide events operate under a different format than traditional NHRA races, with only three rounds of eliminations and the top two drivers advancing from each of the first and second round matchups. The point system remains unchanged, though, as the third and fourth-place finishers in the final round are awarded points as if they’d lost the semifinal on a normal event weekend.

Last year’s Las Vegas four-wide round proved to be a strong predictor of two of the eventual champions, as Top Fuel driver Steve Torrence and Funny Car driver JR Todd each took a victory. Both repeated in Las Vegas’ second event in October, with Torrence in the midst of the first perfect Countdown to the Championship in NHRA history. With both drivers still searching for their first win of 2019, they’ll be hoping that Lady Luck is on their side once again this weekend. 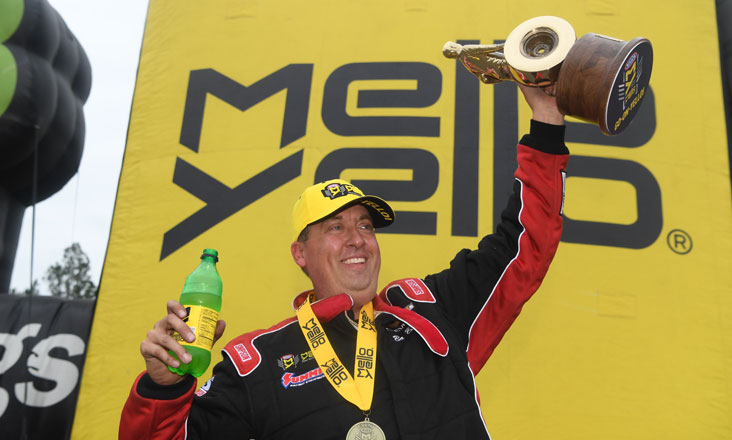 Pro Stock Motorcycle holds just its second race of the year in Las Vegas, and will run both four-wide rounds in 2019 after missing this event last year. Andrew Hines kicked off the season with a win in Gainesville, while Jerry Savoie won last year’s only four-wide PSM round in Charlotte and Hector Arana Jr. won the two-wide race here during the Countdown. Conversely, Pro Stock will skip the Charlotte four-wide round later this month, giving 2019 Charlotte winner Erica Enders just one shot at repeating the feat. Defending Las Vegas four-wide winner Vincent Nobile remains on the sidelines.

The NHRA Four-Wide Nationals from Las Vegas will air on Sunday at 5:30PM ET/2:30PM PT on FS1. The Top Fuel and Funny Car teams return to action next weekend at Royal Purple Raceway just outside of Houston, while Pro Stock Motorcycle resumes its season at zMAX Dragway with the second four-wide event of the year later this month and Pro Stock sits out until May 17-19 at Virginia Motorsports Park.