Today marks the eighth of 24 rounds on the NHRA Mello Yello Drag Racing Series calendar for 2018, as the series returns to Heartland Motorsports Park in Topeka. Built in 1989 and a staple of the NHRA schedule for a number of years, the facility has a lengthy history that also includes both NASCAR and World of Outlaws events. Clay Millican (Top Fuel), Courtney Force (Funny Car), and Deric Kramer (Pro Stock) sit atop their respective qualifying ladders coming into Sunday’s action.

Just like Indianapolis 500 qualifying yesterday, rain throughout the midwestern United States has the potential to affect today’s elimination program. But if the weather holds off and the racing gets in as scheduled today, these are the storylines we’ll be watching out for:

Which of last year’s winners has the best chance at going back-to-back?

Antron Brown (Top Fuel), Ron Capps (Funny Car), and Tanner Gray (Pro Stock) were the winners at this event last year, but none qualified particularly well for this weekend’s action. Capps and Gray each qualified seventh, while Brown won’t even have lane choice in the first round as he rolls off 12th. It’ll be an especially difficult path for Brown, who will face Leah Pritchett right away and potentially both Tony Schumacher and top qualifier Clay Millican if he’s going to make it back to the final. 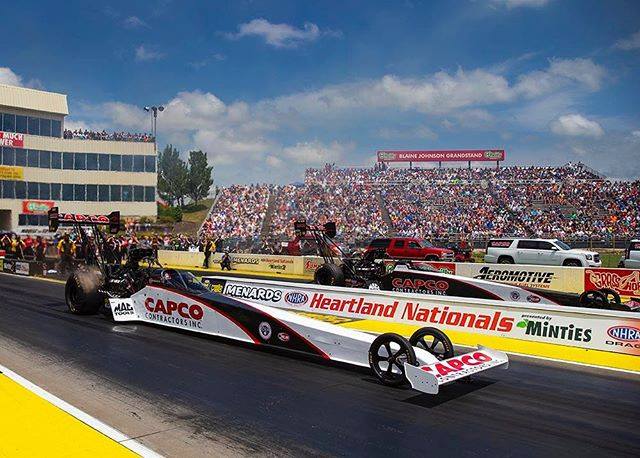 How will this weekend shape the battle for Top Fuel supremacy?

Atlanta was a missed opportunity for both Steve Torrence, who was upset by Blake Anderson in the semifinals, and Schumacher, who lost to William Litton in the first round. Torrence, last year’s Top Fuel runner-up, was able to pad his points lead to 120 over the eight-time NHRA champion, but after last year’s disappointment in the Countdown to the Championship, won’t take that lead for granted. Both qualified strongly in Topeka, as Torrence is second on the ladder and Schumacher took fourth.

Can Courtney Force pad her points lead in Funny Car?

Force’s lead of only eight points over Jack Beckman is the smallest in NHRA’s major classes, but coming off of a victory in Atlanta, she’s got all the momentum on her side right now. Force went right back to the top of the charts in Topeka by earning the top qualifying spot, while Beckman could only muster 12th place and will have to face Bob Tasca III in the first round. But if last year’s results repeat themselves, with Beckman making the semifinals and Force losing in the second round, the lead could swap hands.