When the Texas native joined his team in front of the CAPCO Contractors Top Fuel dragster after winning the NHRA New England Nationals at New England Dragway last weekend, the celebration went on and on. Torrence broke out a bullhorn. The team got into a noise war with Matt Hagan’s Funny Car-winning team, each team slapping the sides of their cars louder and louder. Everybody who wanted a picture with the winner got one—especially some of their new friends, a pair of lobster fishermen who cooked for the team on Saturday night.

Torrence Racing celebrates like it’s their job, because for most of the past year and a half, it has been. They’ve won 13 of the past 37 NHRA Mello Yello Drag Racing Series events, taking eight Wallys in 24 rounds last year and five of the first 13 in 2018. Right now, Torrence holds a 190-point advantage over eight-time champion Tony Schumacher as the Countdown to the Championship approaches.

It’s that Countdown to the Championship, though, that stood in the way of Torrence collecting his first title last season. After a major accident at the AAA NHRA Texas FallNationals, the former points leader found himself in a new car for the final three rounds, losing the championship to a surging Brittany Force under the NHRA’s playoff system.

And one thing is clear: he doesn’t plan on having that happen again this year. 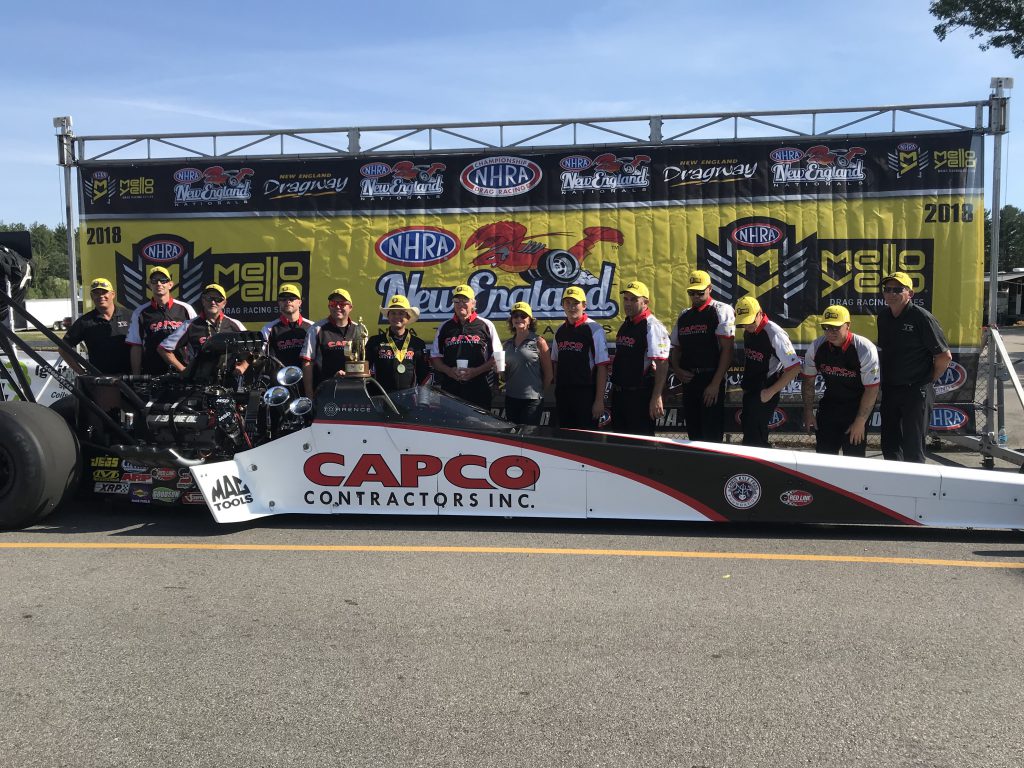 The Torrence Racing story is one of great determination at all levels. After overcoming Hodgkin’s lymphoma as a teenager, Torrence became the youngest Lucas Oil Top Alcohol Dragster world champion in the history of the class in 2005, and landed a ride with Dexter Tuttle’s team in Top Fuel the very next year.

But after half a decade of driving for Tuttle Motorsports, Torrence decided that it was time to come home, literally. Torrence Racing was born, and it’s been a true family affair since day one: Torrence’s mother, Kay, is a welcoming presence in the paddock, while his father Billy, a lifelong drag racer himself, occasionally competes in a second car. And with a crew that has stuck together for most of the team’s existence, the entire team operates as a great big family.

“A majority of these guys have been together since the start of the race team,” he says. “I’ve got one guy that’s been here since day one, and then these others have come in in the first two or three years that we were running, and have been here ever since. So the continuity of the group, I think, is the main reason for and key to our success.

“Everybody can go buy the same parts and pieces and go out and put them together, but the way these guys work together, their attention to detail, and at the end of the day, just the drive and will to win—because these guys, knock on wood, they don’t make as many (mistakes). Everybody’s going to go out and make mistakes, these guys just make fewer of them. It helps Richard (Hogan) tune the car, it helps Bobby (Lagana) with all of the stuff that he has to do, and it just instills confidence in me as a driver that I’ve got a really good racecar to go out there with.”

Unlike larger teams like John Force Racing, Don Schumacher Racing, and Kalitta Motorsports, the Torrence Racing squad is focused only on Top Fuel, and only occasionally runs multiple cars. But the results have proven that staying small has been anything but a detriment for the Texas-based operation.

“I think that, when you go head to head with some of these power teams, some people look at it as if you’re at a disadvantage,” he continues. “They are gathering more data every lap, and they do have so many more heads to put together to make it, but I think that we’ve proven that the power teams aren’t as powerful as they thought they were. In the last year and a half, basically, we’ve won 12 races—that’s almost triple what any other racecar has done out here.” 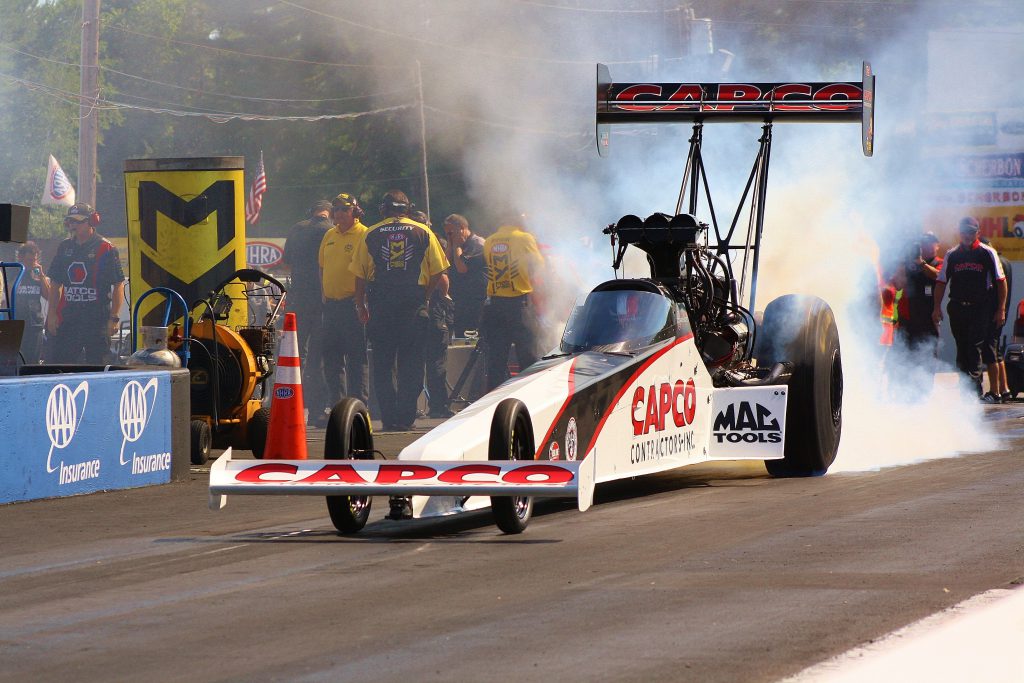 The team faced a galvanizing moment after last year’s Texas crash, in which Torrence beat Richie Crampton to the finish line in the second round of eliminations but would see his car destroyed. While the Torrence Racing team prepared the backup car in less than an hour to go out for the semifinals, the crash represented a hard reset for the team, as everything it had put into its primary car was gone. By Torrence’s own admission, it would take them into this year’s opening rounds to fully regain its footing.

“Everything that we knew was in the trash, and we weren’t able to get our feet back underneath us in time to recover,” he explains. “We had three races left to recover. My guys did a great job—we put a new car together and turned it around in 50 minutes, and got back out for the next round in Dallas. But the very crucial things that you use, clutch controllers and flows and everything like that, they’re all a little bit different. And it took us a little bit of time to figure it out—it took us basically the last three races of the season, and the first race of this season, to get our legs back underneath us.

“Starting this season was a struggle—we struggled at the first race. We didn’t really have a handle on the tune-up like we thought we did in testing, so when we came out, we tried some things. In Phoenix, we went back to our old setup, and were able to get a race win there. After that, it was a couple of trying races trying to get things dialed back in.”

After returning to the winner’s circle at the NHRA Arizona Nationals, Torrence began to regain his 2017 form. He swept both four-wide rounds in Las Vegas and Charlotte in April, and added his fourth victory of the season at Virginia Motorsports Park in June. But as easy as he’s made it look at times, Torrence admits that the season so far has been anything but.

“I don’t think we’ve had as dominating of a performance as we had last year, where you go out and you run the table through qualifying and then you run well on race day,” he admits. “We’ve just been in the right place at the right time and made the right decisions, but we’ve got a pretty good record going so far. And one thing that makes me proud is to see, through the adversity and everything that happened, that these guys just stood right back up and rose to the occasion.

“I think we’re more prepared now. In the event that something like (Dallas) does happen, I think our tune-up is more diversified. We have parts that we interchange from time to time just to make sure that the spare car upstairs is exactly as the car we’re running. You never prepare for things like that until they happen to you. You never really think that you need to have a car that’s identical in the event that it happens when it does, but I think we’re better prepared for that.” 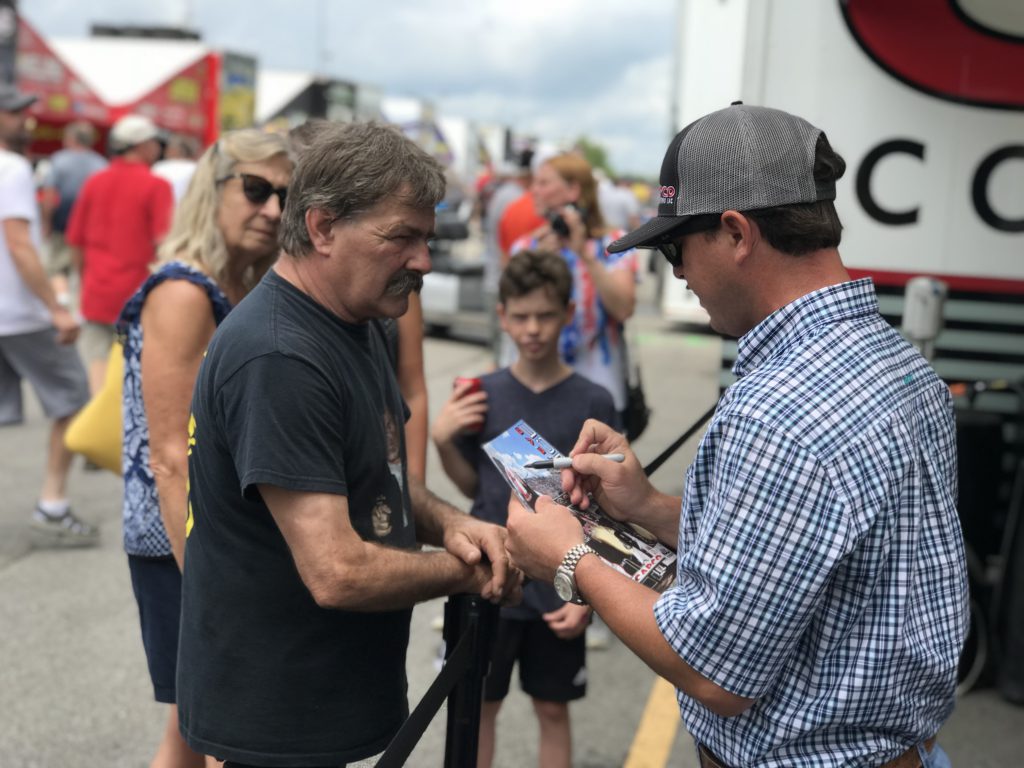 That preparation, Torrence hopes, should serve his team well in the final six races of the season. Playoffs in racing tend to be a sensitive subject with any driver who finds their career altered negatively by their existence. And in Torrence’s case, it’s perhaps especially justified; not only did he lose a massive advantage in the playoff reset last fall, but the NHRA race system is itself already a 16-team ladder similar to the Stanley Cup Playoffs or one region of an NCAA basketball tournament.

Not one to mince words, Torrence had a few choice ones for the playoff system after Force came out on top of last year’s championship. He’d have won the championship by 149 points over Antron Brown without the reset, and Force would have been 421 points back in third. But while he remains disappointed in the end result, Torrence isn’t letting any bitterness get in the way of making up for it this time around.

“The points system, it is what it is, but you can’t change it,” he says. “We were at a big disadvantage—had the points been a regular deal, we were (nearly) 500 points ahead of the person who won the championship, so basically, they’re not even in contention. I was frustrated, and I said some things that I probably shouldn’t have said, but when you’re right there and you have a lifelong goal in the grasp of your hands that slips through, it’s frustrating.”

Even still, Torrence and company know what’s been working for them. And with those final six races looming ahead, they’re not going to let the reset alter that.

“I don’t think that we change our approach at all,” he adds. “I mean, really what derailed our championship season was wrecking in Dallas, the big wreck that we had there, and then having to put together a totally new car with all new clutch management and new everything.

“We won eight last year, and our champ won four. So our point system is not indicative of who had the best racecar all year. But again, it is what it is, and we can’t change it. We’re just going to go out here and stay focused and continue moving forward. I think that you’re at a disadvantage when you go into the Countdown with such a big lead and then you lose it, but you’ve just gotta finish strong. You’ve gotta be in those last six and really race hard.” 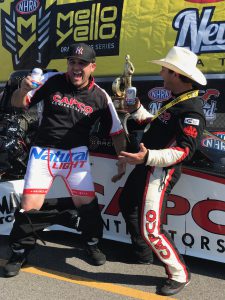 For now, though, it’s still all smiles in the Torrence Racing camp after the win in New England. The victory was particularly special for crew chief Bobby Lagana, a New York native who grew up competing at the track and had a number of friends and family members on hand.

So it was no surprise when Lagana gave the photographers their most passionate moments of the weekend. After being the center of a dogpile at the starting line just seconds after the victory, Lagana was one of nearly a dozen people to take photos alone with Torrence and the Wally. While Torrence held a can of Natural Light, Lagana dropped his pants to show off matching Natural Light boxer shorts.

“This is just what they do,” said a team affiliate. “They celebrate however they want because they’re a family owned team. They don’t have anyone else to answer to.”

On the track, nobody has had an answer for Torrence and company this year. And if things continue that way, we just might see the loudest and most legendary celebration in NHRA history come November.

After all, they’ve had plenty of practice with the bullhorn already. 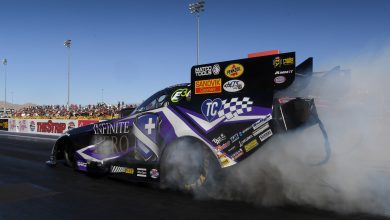 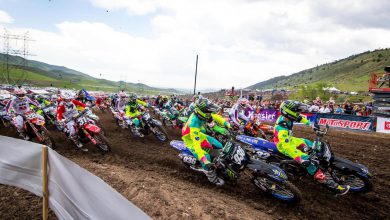 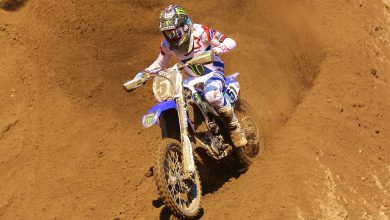 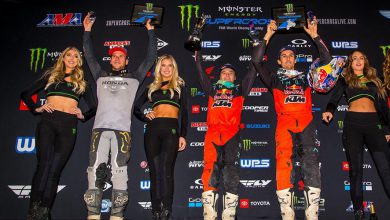 The Week That Was: Impressive Performances in Minneapolis, Daytona, and More