One of the busiest stretches of the NHRA Mello Yello Drag Racing Series season finally draws to a close for Top Fuel and Funny Car teams with this weekend’s Summit Racing Equipment NHRA Nationals. Held at Summit Motorsports Park in Norwalk, Ohio, the event ends a stretch of four weekends on the road in a row for the sport’s two premier classes. It also marks the halfway point of the 24-race calendar.

It also marks the first time since the Route 66 NHRA Nationals at the beginning of the month that both Pro Stock and Pro Stock Motorcycle will be in action, and both classes will be chock full of racers looking to come out swinging after their two-week break. Bo Butner and Andrew Hines have dominated the respective classes so far in 2019, but Deric Kramer and defending Pro Stock Motorcycle champion Matt Smith were the duo that came home with Wallys at Route 66.

In Top Fuel, Mike Salinas finally broke Steve Torrence’s five-race winning streak last weekend at Bristol Dragway, scoring his second victory of both the season and his career. Salinas’ win made him just the second multi-race winner of the year behind Torrence. Blake Alexander won his first race of the season in Norwalk last season; with names like Antron Brown, Leah Pritchett, Austin Prock, and Clay Millican still winless in 2019, don’t be surprised to see somebody else repeat the feat this weekend. 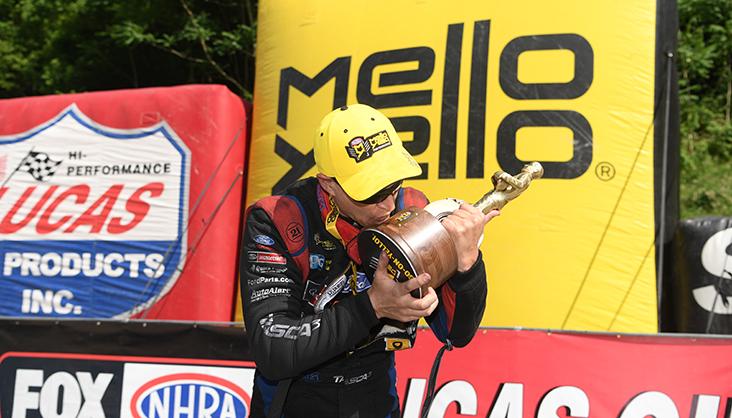 That’s exactly what happened in the Funny Car class in Bristol, in fact, as Bob Tasca III not only earned his first Wally of the season, but also his first since 2012. To do it, he had to dash the hopes of the legendary John Force, who continues to chase his 150th career NHRA victory and his first win since Bandimere Speedway last July. Expect Force to push hard to attempt to claim his first Norwalk win since 2014, though Don Schumacher Racing drivers Matt Hagan (2018), Ron Capps (2016), and Jack Beckman (2015, 2017) have owned the track in recent years.

After this weekend, the NHRA Mello Yello Drag Racing Series takes a well-deserved break after a full month on the road. They’ll spend two of the next three weekends off, with the July 5-7 NHRA New England Nationals at New England Dragway serving as both the exception and the kickoff event for the second half of the calendar.