CJ Greaves became the first three-time winner of the Amsoil Cup on Sunday afternoon when he took the checkered flag to cap off an incredible weekend at Crandon International Raceway. Greaves successfully defended his Pro 4 championship in Saturday’s Lucas Oil Midwest Short Course League season finale, and followed it up by taking three victories in Sunday’s Crandon World Cup action, including the feature race that paid $49,000 to win. He did so by returning to the Pro 2 class for the first time since his title-winning season in 2016, surviving past a number of others’ misfortunes, and holding off his father Johnny by more than two seconds.

“This truck has been sitting since 2016, but man, Molly, she’s a good old girl!” Greaves said of his return to the Pro 2 ranks. “She’s just been caged up and wanting to come out and get released! I just can’t thank my crew enough—they worked their butts off. We came here with four side-by-sides, three Pro 4s, and a Pro 2, and they kept all the stuff going on the track.”

After winning both the Pro 2 and Pro Stock SXS World Championship races earlier in the day, and finishing third in the Pro 4 World Championship, Greaves wouldn’t reveal his choice for the Amsoil Cup until rolling onto the line. In the end, he chose the Pro 2, which was built under Lucas Oil Off Road Racing Series rules and would thus start behind the MSCL Pro 2s at the beginning of the event. 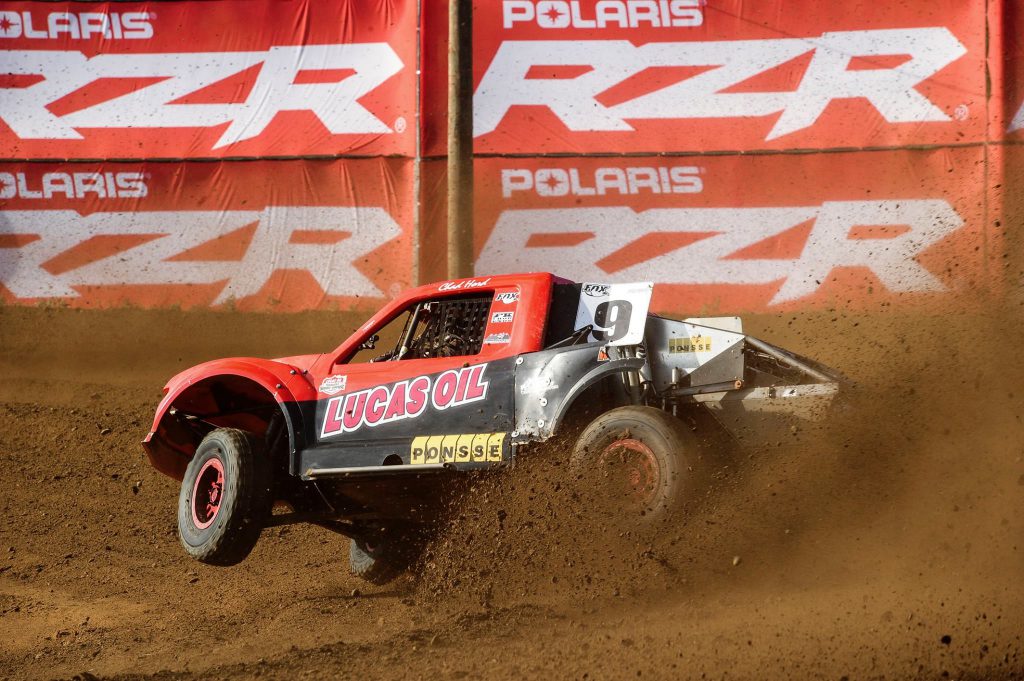 Chad Hord took the MSCL Pro 2 holeshot, with Greaves leading Brian Deegan as the LOOORS Pro 2s got off the line and defending Amsoil Cup winner Bryce Menzies looking to add to his Pro 4 World Championship victory earlier in the day by taking the Pro 4 holeshot. Unfortunately, one of the popular picks for the win took a DNF early as Kyle LeDuc made contact with the outside wall on the landrush start and only made it through Turn 1 before pulling off.

But with no points on the line, the race was always destined to be one of attrition as many of the sport’s biggest names began to fall by the wayside. Menzies slowed and lost the Pro 4 lead to Johnny Greaves, eventually falling off the pace entirely. Then, as the laps wound down, Bob Brand’s Pro 2 rolled over, forcing a brief red flag and restart and eating away at the huge advantage that the Pro 2s still held over the Pro 4s. With the bunch-up, Keegan Kincaid elected to pull off track from second place overall with a flat left front tire, rather than holding up faster trucks.

Hord led CJ Greaves, Brian Deegan, and Johnny Greaves during the restart, but only two of them would crack the podium. Hord gave up the lead by getting on two wheels and hitting an embankment, losing three spots before getting back in the right direction and eventually falling to sixth. Deegan, meanwhile, pulled off in the final few laps with smoke billowing from the back of his truck. That opened the door for a Greaves Motorsports 1-2, with the son leading the father to the line.

“I was marking my dad, and I saw those guys coming, but at the same time, I was watching Chad,” Greaves said of the restart. “After the restart, I think they gave him a little bit bigger of a lead than he had, but they also added a lap. So when we came around and saw that it said three to go instead of two, I said ‘alright, now we have something to work on.’” 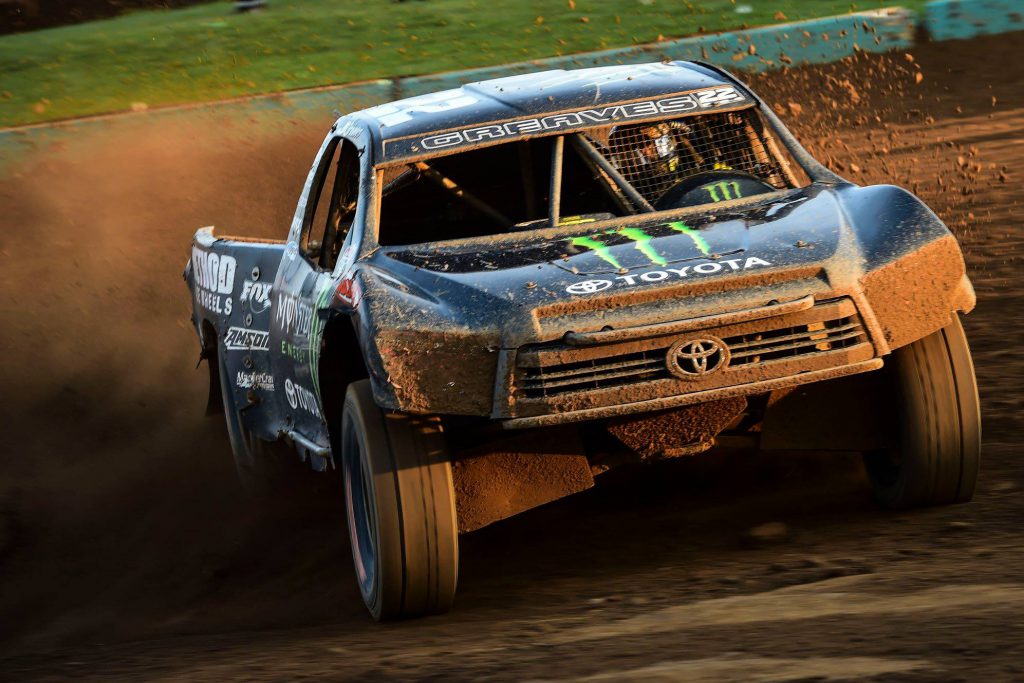 Johnny Greaves, who finished fourth in the Pro 4 World Championship earlier in the day, held off the best of America’s Pro 4 racers in the Amsoil Cup race. After Menzies’ DNF, nobody else in the field of both MSCL and LOORRS racers could find the pace to catch this year’s MSCL Pro 4 championship runner-up.

“How could you write a better script than this?” Greaves asked from the podium. “A couple of guys had some unfortunate luck, but I got out clean, and once I got out in the lead with Bryce, I realized I could run the pace with him. We just went after it—the truck was running awesome, and the crew did a great job. I hated to see that restart because I think it hurt me a little bit, but all in all, they did a great job in officiating (the race), and this is the most awesome Crandon I’ve ever seen in terms of the crowd and the truck turnout.”

RJ Anderson, himself a dual-class driver in LOORRS competition who elected to bring only his Pro 4 to Crandon, completed the podium. After suffering early trouble in the Pro 4 World Championship, Anderson managed to break free from a tight battle with fellow LOORRS racers Scott Douglas and Bradley Morris to climb from mid-pack after the restart all the way up to third in the race’s final laps.

“I got a little bit lucky there at the end, but I’ll take it!” Anderson said. “This is actually the first time bringing my Pro 4 to Crandon, and having the problem in the first race today, I didn’t really get any laps. So this was my first run with these guys, and I settled in in that first half and figured it out. Then we had that yellow, and it was go time. We made some quick work—I think we were ninth or 10th, and we were able to bring it home third, so I’m pumped.” 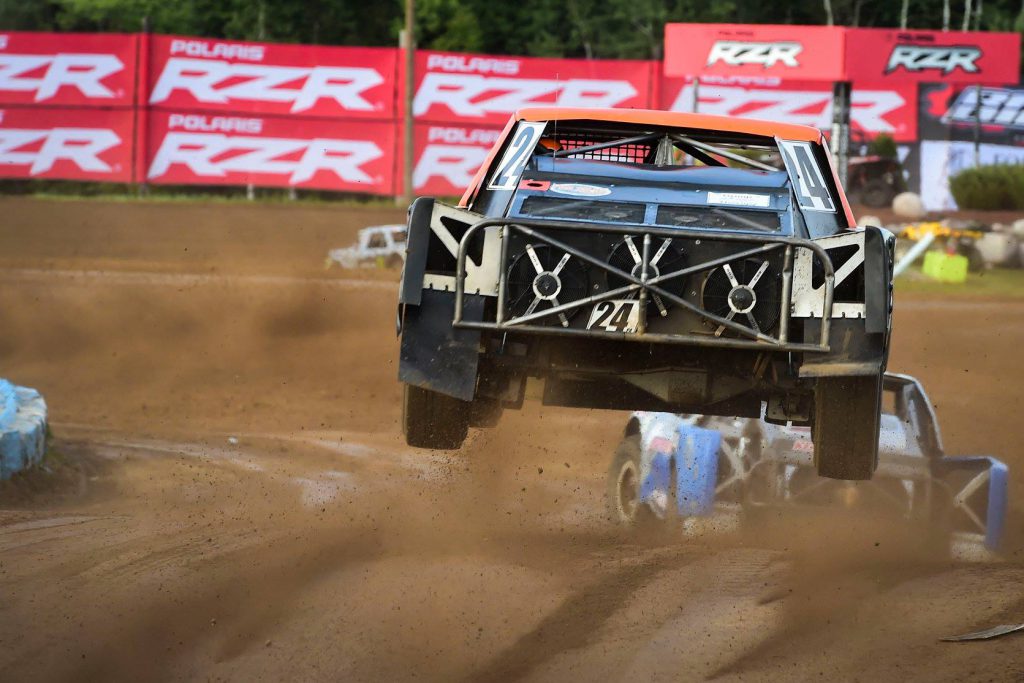 Crandon International Raceway president Cliff Flannery praised a thrilling weekend of action from The Big House, which hosted its 49th Annual World Championship Off-Road Races this weekend. In addition, Flannery joined all of the podium finishers in thanking the sellout Crandon crowd, and excitedly shared big plans for next year’s golden anniversary of the seminal short course event.

“We started here Thursday with all the drivers practicing, then went downtown with the parade, and all the drivers got in on it and made it one of the biggest parades we’ve ever had downtown,” Flannery said. “Then we came down here with all these volunteer workers and all these great fans that made this by far the biggest weekend we’ve ever had in Crandon. I want to thank all the sponsors that came in here and made this a successful weekend. We worked hard to give everyone a great track, and I think we did.” 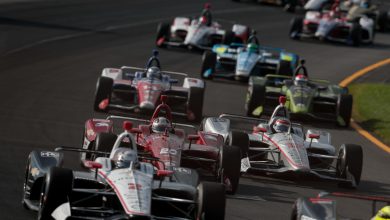 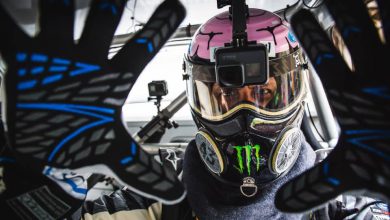 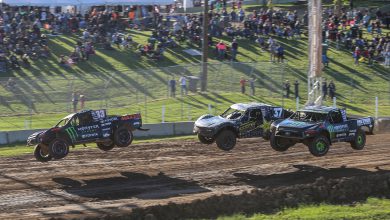 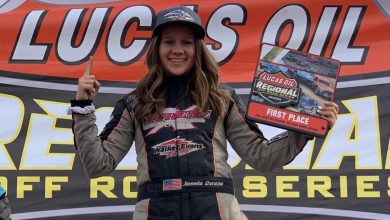